by Admin
in Marine Incident/Accident
0

A vessel was in ballast and at the anchorage at night, awaiting better weather before taking fuel and continuing the voyage. Five shackles of cable had been used to anchor the vessel and the OOW had set the variable range markers on the radar display to a head of land to the east and to vessel ‘A’, which was anchored three cables to the northwest. 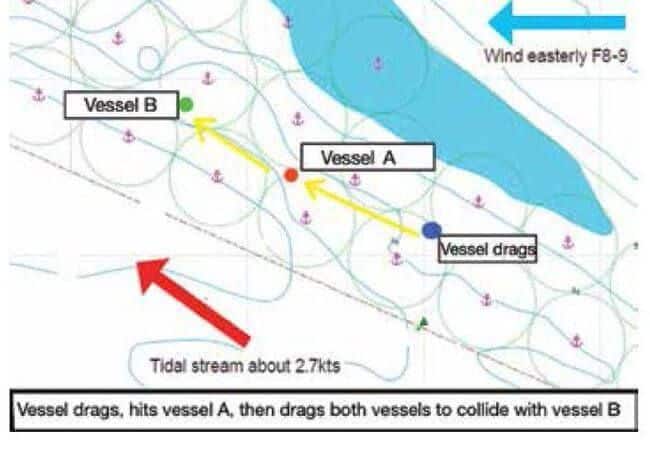 The OOW remained on the bridge completing chart corrections and other tasks and fixing the vessel’s position on a paper chart every 30 minutes. The helmsman was sent below to do fire and safety rounds. The vessel began to drag anchor in a north-westerly direction, but the OOW only noticed this nine minutes later, when he saw on the radar that the distance to vessel A had decreased. He called the Master and ordered the engine as well as instructing the rating on duty to go forward and check the anchor cable.

Soon, the ship’s speed had increased to 0.9kt, dragging in the direction of vessel A. The OOW on vessel A now contacted the first vessel to ask them their intentions. Vessel A’s OOW ordered main engines and also alerted the Master to the developing situation. Before any other actions could be undertaken the stern of the vessel dragging anchor collided with vessel A’s bow. By the time the main engine was available, the Master was unable to manoeuvre clear because his vessel’s stern was fouled on vessel A’s anchor cable.

The two entangled vessels were now set by the wind and tidal stream, at over 3kt, towards vessel ‘B’, which was anchored two cables to the north-west. Vessel B’s OOW had been monitoring the radio exchanges and had called the vessel’s Master and crew. Although the Master of vessel B soon engaged astern propulsion this did not prevent contact with the oncoming vessels. All three vessels began to set to the northwest.

The official report’s conclusions included, among others:

Factors such as the strength of the wind and tidal stream, tidal range, nature of the seabed, sea conditions, vessel loading, the extent of safe water available and duration of stay must also be considered when anchoring.