Bill Of Lading in Shipping: Importance, Purpose, And Types

by Admin
in Pengetahuan, Umum
0

If we search the meaning of the term “bill”, it is defined as a printed or written statement of the cost for the goods or services delivered or to be delivered. The term “ lade” means to put the cargo onto a ship or other form of goods carrier.

Thus, a bill of lading in shipping is a record of the traded goods which have been received on board. It is a document that establishes an agreement between a shipper and a transportation company for the transportation of goods. Transportation Company (carrier) issues these records to the shipper.

A bill of lading indicates a particular carrier through which the goods have been placed to their final destination and the conditions for transporting the shipment to its final destination. Land, ocean, and air are the means used for bills of lading.

The Importance of Bills of Lading

The carrier need not require all originals to be submitted before delivery. It is therefore essential that the exporter retains control over the full set of the originals until payment is effected or a bill of exchange is accepted or some other assurance for payment has been made to him.

A bill of lading, therefore, is a very important issue when making shipments to move the cargo or freight from one point to the other. On one hand, it is a contract between a carrier and shipper for the transportation of goods and on the other hand, it serves as a receipt issued by a carrier to the shipper.

Hence, the bill of lading is considered a legal document that provides all the vital details to the shipper and the carrier to conveniently process the freight shipment through different maritime countries and invoice it correctly.

The original copy of the bill of lading is provided to the carrier, and a copy of the same should also be ascribed to the packaged freight.

Negotiable and Non-negotiable bill of lading?

In this type of bill, clear instruction is provided to make the delivery of the goods to anyone having possession of the original copy of the bill, which itself signifies the title and control of the freight. In this type of bill, the buyer/ receiver or his/her agent has to acquire and present an original copy of the bill of lading at the discharge port. In the absence of an original bill copy, the freight will not be released.

Non-negotiable bill:  This type of bill of lading fixes a specific consignee/name of the receiver to whom the freights will be shipped and delivered. It, however, does not itself serve the owner of the goods.  Under this type of bill, the assigned receiver/ buyers can claim the cargo by confirming their identity.

Purpose of Bill of Lading:

The bill of lading document is meant to act as a transport document enacting as the evidence of the contract of carriage of the goods.  A negotiable bill of lading has the following legal qualities:

Types of Bill of Lading

On the basis of execution: 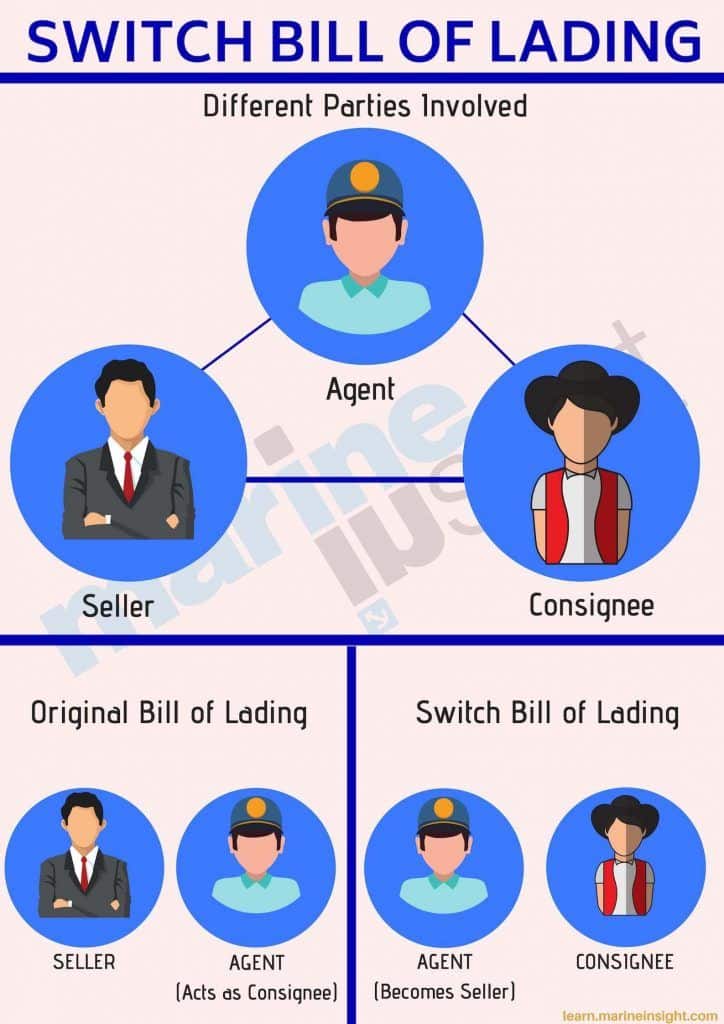 3. Bearer bill of lading is a bill that states that delivery shall be made to whosoever holds the bill. Such bill may be created explicitly or it is an order bill that fails to nominate the consignee whether in its original form or through an endorsement in blank. A bearer bill can be negotiated by physical delivery. They are used for bulk cargo that is turned over in small amounts.

–    Since the ship visits several foreign ports where the language, practice, procedures may be different the master might be inconvenienced during the delivery of the cargo. People might fraudulently collect the cargo.

All goods which have not been paid in advance and are shipped under “To order” of the bill of lading can be categorised into two types:

ON the basis of Method of Operation:

Sets of Bill of Lading:

This is an old practice where the bills are signed in the sets of three originals to facilitate the goods are timely delivered even when the original is lost. They are stated as the first original, second original, third original on top of the bill. A duplicate copy with a stamp – “Non-negotiable” may also be distributed.

This is a reason why the bank, negotiating a letter of credit that covers the cargo, will always ask for the full set of B/Ls. This is to prevent other B/L holders from legally claiming the cargo before the bank does.

Bill of lading as Contract Of Carriage:

The popularly used conventions and rules which covers the contract of carriage for carrying goods by sea  :

The popularly used conventions and rules which covers the contract of carriage for carrying goods by sea  :

The convention which governs the contract of the carriage is usually stated in the first page of the bill of lading. Upon booking space for shipment by the consignee the carrier sends a booking confirmation which states  Clauses sent by the carrier, it will indicate the terms and conditions that will govern the booking and contract of carriage.

Contents of Freight Bill of Lading:

The bill of lading comprises of the following details:

However, these precautions must be taken before signing the bill of lading.

The paper bill uses printed bills of lading which are both costly. The bill has to be couriered which is an additional cost

–    The slow movement of the paper-based bill of lading.

–    Carriers are obligated to release the goods only on the production of an original bill of lading, which if not received in time will slow the process.

–    The paper bill can be forged, and delivery of goods against a forged bill of lading will lead to a huge loss

Advantages of Electronic Bill of Lading:

Problems with the Electronic Bill of Lading

It is possible to negotiate and transfer the possession of the paper bill as it is the evidence of the title of the goods. However, this is not automatically the case with e-bill.

(Source – A paper bill of lading is a document of title, enabling it to be negotiated and transferred as possession of the bill is evidence of title to the goods. This is not automatically the case at law with an e-bill)

If the electronic bill system is not secured, it can be hacked, and the details can be manipulated as per the convenience of the hacker, leading to fraud and loss of cargo

Implementation of an electronic bill system across the industry needs consent from all the stakeholder, which will take time.

No images found!
Try some other hashtag or username